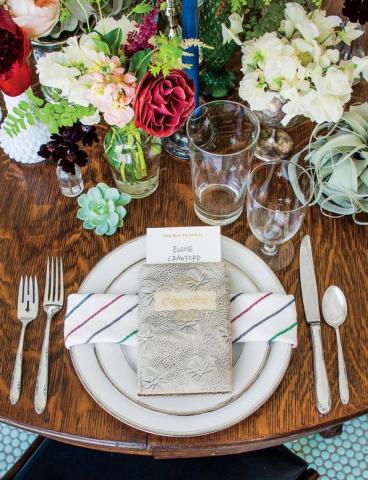 Hey guys! Leah here. Hopefully everyone is staying safe and healthy out there. This is certainly a time of adjustment, isn’t it? For us at the library, it has meant postponing events. But then we thought, “Just because we aren't able to host these events in person, that doesn’t mean they cannot happen at all.” As many of you have seen, the Fort Smith Public Library now has a YouTube channel with all kinds of fun Storytimes with Ms. Robin, Ms. Tiffany, and Ms. Rachel. If you check us out on Facebook, you’ll see the STEAM projects I’ve prepared, along with other helpful resources and activities.

One event I’d been planning was a Book Tasting. Imagine a fancy table set up with vases of roses, lit candles (and by “lit”, I mean the LED lights are switched on), and stacks of books. Each table has a different genre. Participants would read samples from the books, and then rotate to a new table until they found a book they wanted to check out. This similar concept has also been done in the form of Blind Date with a Book. Here, the book covers are hidden and participants must read the inside to determine if it’s a book they want. In other words, they can’t judge the book by its cover.

So here we go! I’m going to give you snippets from several books (the covers of which you cannot see) and if any of them catch your interest, log in to your library account and put them on hold for curbside pickup (Monday-Friday, 1-5). If you need help with this, just give us a call at (479) 783-0229! We can pretend there are roses and finger sandwiches.

Virtually Yours   By Sarvenaz Tash

“But the overwhelming majority of me kept thinking: Why not? Sure, it was easy to make fun of a dating app whose name was synonymous with vomiting and to laugh at those SNL sketches mocking the very idea of VR love. But I was certainly not going to meet anyone holed away in my dorm room. Why not let a machine give it a go in an attempt to find my HEA—my happily ever after? HEAVR’s matchmaking skills were supposed to be second to none, and for a little bit extra, they’d even throw in the meet-cute. I’d splurged.
“Mariam Vakilian?”
I smiled brightly at the woman in the lab coat as I got up and followed her down a hallway. No sense in not being extra friendly to someone who potentially held my entire romantic future in the palm of her hand.”

The Killing Woods   By Lucy Christopher

“It was ages since Dad had brought back something injured, and he’d never brought back a deer, though I could remember helping him free a roe deer from a snare in the woods once. Back then his hands had moved quickly and gently, darting from the wire on the doe’s leg and then to her neck for a pulse, stroking her constantly. This was something like that again. Saving another deer could be a good thing for Dad, something to take his mind off everything else, to help bring him out of his dark place. I heard Dad’s feet scuff on the cobbles in the lane, saw his movement. I tried to pick out the shape of the deer’s body, but it was all wrong. The legs weren’t long enough, neither was its neck. I took a step towards them. And that’s when it made sense: the shape. It wasn’t a deer Dad was carrying. It was a girl.”

I Hope You Get This Message   By Farah Naz Rishi

“There was nothing more to say. Jesse could feel the weight of Ian’s gaze on his back, the heaviness of his anger and pity. He took a deep breath, ignoring the twisting in his stomach. He would not turn around. Ian would go to Nashville and forget all about Roswell and Close Encounters and the nights they’d spent touching each other under its fluorescent radiance. He’d forget all about Jesse. And Jesse would stay here. Jesse would always stay here.”

The Kingdom of Back  By Marie Lu

“That was the reason behind everything this morning. Children my age, Papa said, could not play the clavier with the skill that I did. I was the miracle. Chosen by a divine hand. Destined to be noticed. If I could demonstrate this to Herr Schachtner, he could extend an invitation for me to perform before Herr Haydn, the most acclaimed composer in Austria. He would be my gateway to the royal courts of Europe, to the kings and queens…I nodded in his direction. My chest fluttered as if it were brimming with moths. My fingers twitched, eager to dance. “Yes, Herr,” I said. The last time he visited our home, he had not noticed me. But, then, he had no reason to.”

Three Things I Know Are True  By Betty Culley

I look at the water/ and wonder if rats can swim.

Before I start to ask Clay/ Three things about rats,/ he says,/ Tell me three things

you know are true./ This is harder than you think.”

“They bought other colors, of course, but it was the red ones that carried the whisper of a magic not so different from the glimmer. Our red shoes bore the hint of something forbidden and a little scandalous. Parents bought them for anxious brides, who then kissed their grooms with enough passion to make the wedding guests blush. Women had pairs made for class reunions, strutting into the tinsel-draped auditorium like queens. Husbands gave them to their wives before trips meant to celebrate twenty- or thirty-year anniversaries, and the couple always came back with their eyes glinting, as though they’d just met. Well-crafted seams and delicate beading gave my family a trade and a living. But red shoes gave us a name. They made us infamous. They made us brazen. Until they came for us. Except that’s not quite true. They didn’t come for us. They came for me.”

Once the library reopens, I hope to host this event in person. Until then, please continue to practice safe social distancing, and keep doing the things that bring you peace and joy.