To support efforts to contain the spread of COVID-19, all four locations of the Fort Smith Public Library will be closed until further notice.  For information on how to contact library staff, curbside pickup of library materials, the new digital access-only library card, and more check our Facebook page or the library website.

Yo ho ho and a barrel of fun! 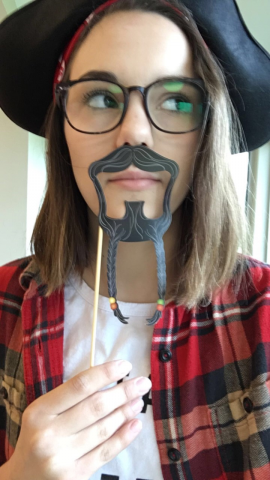 Yo ho ho and a barrel of fun! 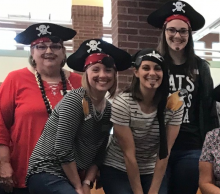 Ahoy, mateys!  September 19th is International Talk Like a Pirate Day and the Miller Branch is celebrating with two fun pirate-themed events!  On Tuesday, September 17th, we are hosting a special nighttime storytime, complete with pirate stories, sea shanties, and games.  On Thursday, September 19th, little pirates can pop in anytime from 1:00 – 6:00 p.m.  to make some fun crafts and dine on cannonballs (Whoppers), fish (Goldfish), and Caribbean Sea water (juice) at our Crafternoon.

Want to impress your buddies by learning to speak like a pirate?  Your Fort Smith Public Library card gives you access to Mango Languages,where you can learn over 70 languages – including pirate - through interactive lessons.  During the first pirate lesson, you’ll learn how to say captain’s orders.

"Arr, me hearty! A fine gentleman o' fortune be ye!" (Great, my friend! You're a fine pirate!) 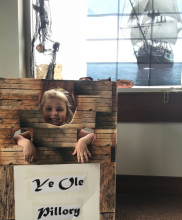 Did you know that most scholars believe that pirates actually had the same accent as English merchant sailors?  What we today think of as a pirate accent can actually only be traced as far back as 1950 – to the Disney movie Treasure Island.  Actor Robert Newton played the character of Long John Silver and based his dialect for the movie on his native West Country in England.  While there were some pirates that originated from that area, the majority did not.   Hollywood also came up with the idea of walking the plank.  For more information on the history of pirate language, click here!