The Main Library is now open for brief visits, Monday - Friday, 9 a.m. - 5:30 p.m.  Appointments are required, and not all library resources are available.  Click here to request an appointment.  For more information on library reopening, including appointments, due dates, overdue fees, and new services such as curbside pickup and digital access-only library cards, click here. 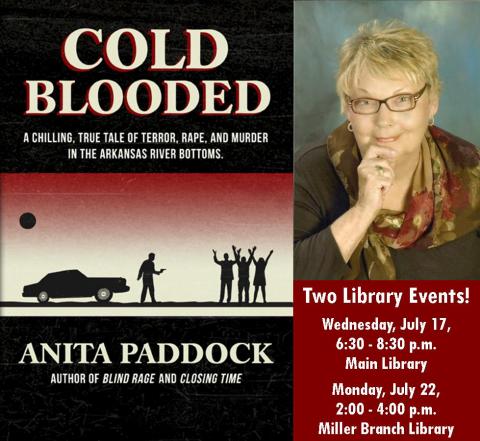 On a cold January morning in 1981, a knock on an apartment door began what would become one of the bloodiest crime sprees in Arkansas history.  In the coming days the bodies of newlyweds Larry and Jawana Price, businessman Holly Gentry, and Police Detective Ray Tate were discovered. They had been executed in cold blood and discarded like so much trash. What kind of person murders four people in cold blood? Did the right one go to prison?

A native of Van Buren, Arkansas, Anita Paddock has been teased and called “the Grandma Mosses of True Crime.” She says that with this third book Cold Blooded, published in her seventy-eighth year of life, she qualifies for that esteemed title to be granted to her.  All of Paddock’s books are about murders committed in and around her hometown of Van Buren, Arkansas. In all those cases, she had some connection with the victims, and sometimes with those who were convicted for the crimes. Copies of Anita's books Cold Blooded, Blind Rage, and Closing Time are currently available for sale at both the Main Library and Miller Branch Library, as well as online at our Library Store.

For more information on this or any of the Fort Smith Public Library’s free programs, call 479-783-0229 or visit the library’s website at www.fortsmithlibrary.org.