The Main Library is open for brief visits by appointment Monday - Friday, 9 a.m. - 5:30 p.m.  Appointments are required and each appointment is for a maximum of 30 minutes.  Click here to request an appointment.  For more information on library services during COVID-19, including appointments, curbside service, digital access-only library cards, online library card renewal, online resources, digital programs, and more, click here. 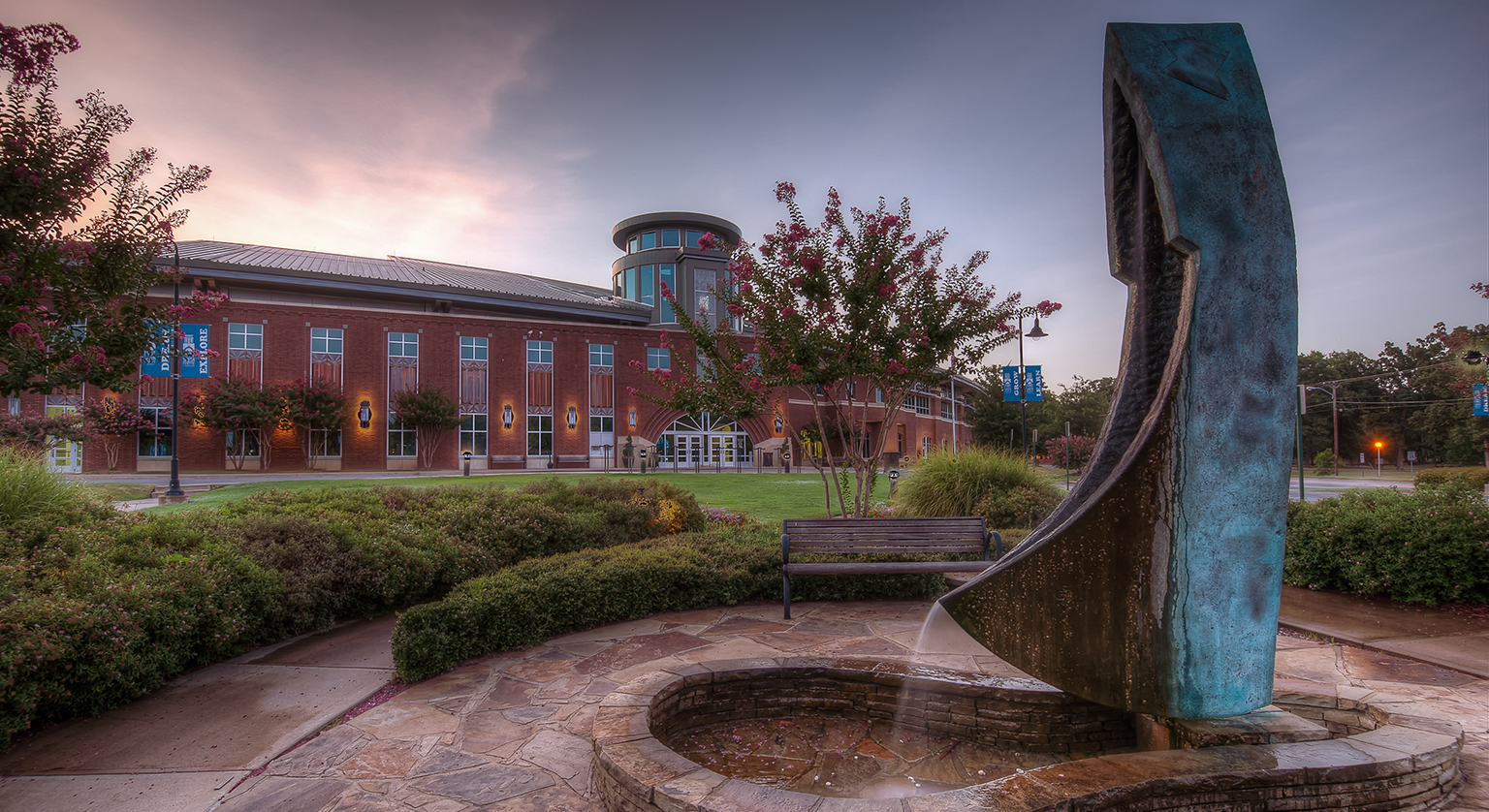 About the Building: Library Architecture 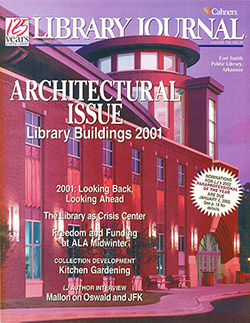 The Main Library is a contemporary, light-filled, open building featuring the use of traditional materials such as brick, stone, and wood.  The building was designed by architect Jeff Scherer, a Fort Smith native.  Based in Minneapolis at Meyer, Scherer & Rockcastle, Ltd., Scherer has designed libraries across the United States.  Scherer also designed the three neighborhood branch libraries.

The building’s overall design was influenced by the dynamics of the building site: a wooded, park-like setting at the confluence of Rogers Avenue and Free Ferry Road.  Blending the library of today with the library of tomorrow, the 67,000-square-foot building allows the library to showcase its traditional resources while providing access to digital resources.  Brick, stone, and copper are used as exterior materials, with the details echoing the craftsmanship of the late 19th century.  These traditional materials give the library a feeling of stability and endurance, while the curved shape and many windows add grace and light.  The arched entrance suggests an open book with fanned pages.  The terrazzo floor bears the design of a branching tree, which leads toward different areas on the first floor.

The Main Library opened on February 23, 2001.  A photograph of the Main Library was selected to appear on the cover of Library Journal’s annual architectural issue, published in December 2001.

An iconic feature of the Main Library’s landscape is the 11-foot-tall bronze sculpture known as Transcendurance.   Designed by sculptor Douglas Warnock of Pocatello, Idaho, water flows out of the sculpture’s interior into an organically-shaped base.  In its original design, the base contained bronze figures designed by Fort Smith children.  Warnock’s inspiration for the work grew out of a combination of the words transcendence and endurance – the two qualities that Warnock felt best exemplified the struggles and achievements of the people of Fort Smith over the years.

The sculpture’s form, an ax head standing on its edge, is a visual representation of elements in Fort Smith’s richly unique cultural and economic history, from the indigenous Mississippian culture’s use of primitive tools to the days of trapping and trading by Native American and European settlers.  Starting at the sculpture and leading to the library’s entrance, the individual letters of the word transcendurance move visitors toward this repository of vast sources of historic information, general knowledge, enjoyment, and pleasure — the library. 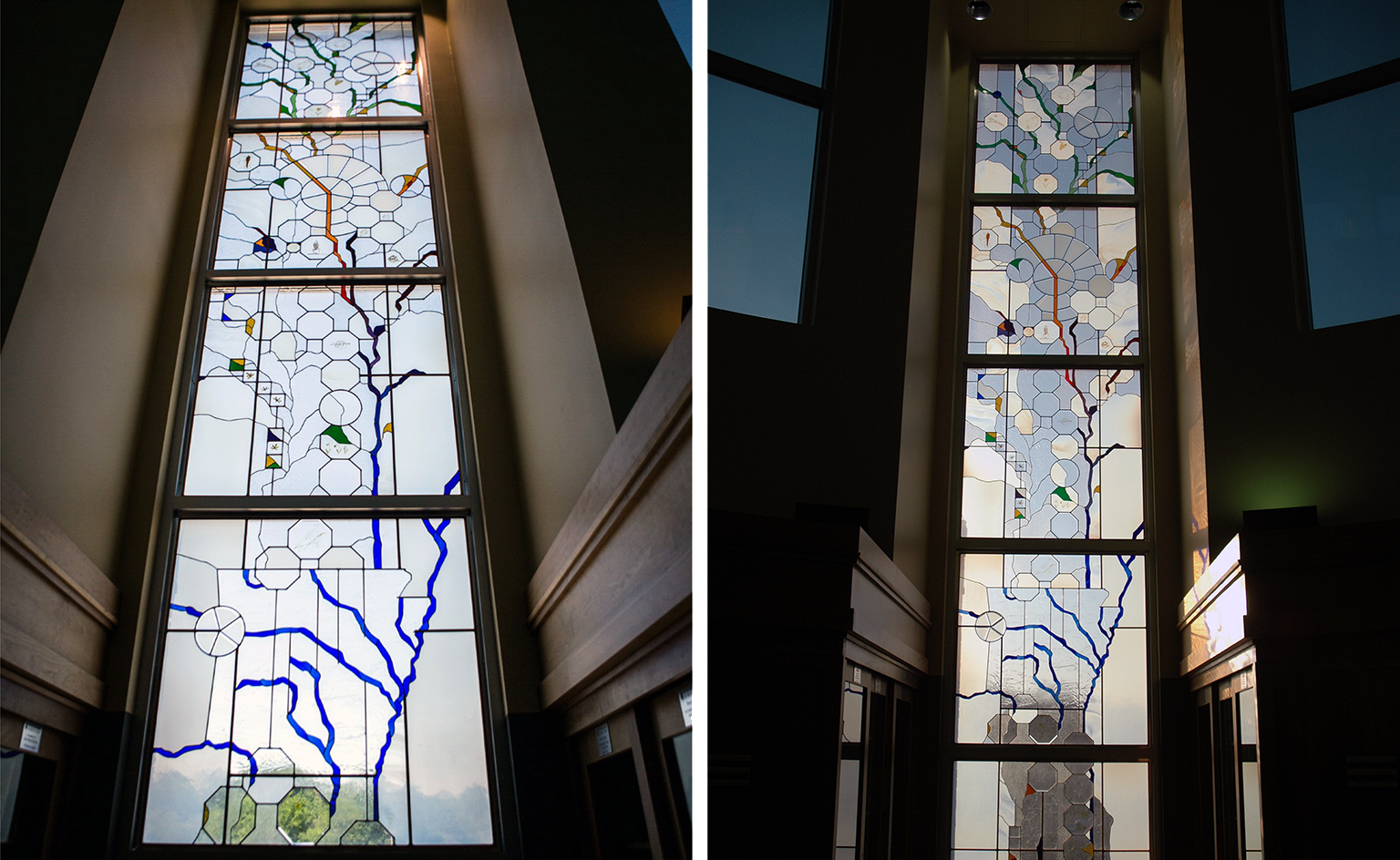 The stunning stained-glass window that towers over the Barbara Jones Walker Genealogy and Arkansas History Collection is the work of Michael Pilla, founder and principle designer of Monarch Studios.  Pilla says his work has been strongly influenced by the artist/craftsperson ideals of the American arts and crafts tradition.  Hands-on involvement with materials and techniques is particularly important in his creative process.

Pilla allowed the location of the window, on the library’s 2nd floor, dictate its composition.  He used elements of Fort Smith’s past as a frontier town including a partial wagon wheel and a map of Arkansas emphasizing the rivers of the state.  Pilla added another local touch by using Fort Smith children’s drawings on small pieces of glass scattered throughout the window.

Colorado artist Sharon Anhorn uses copper and aluminum to craft her beautiful screens and wall hangings.  Inspired by New Mexican tinwork, the metal that frames the glass is an integral part of her artwork.  She uses the repoussé method of “embossing” the metal then adds glass and ornamentation.  The ornamentation can include antique jewels, beads, and odd items that catch her eye. 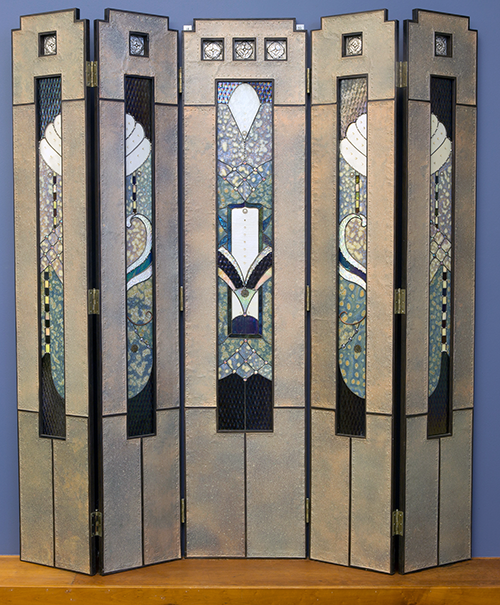 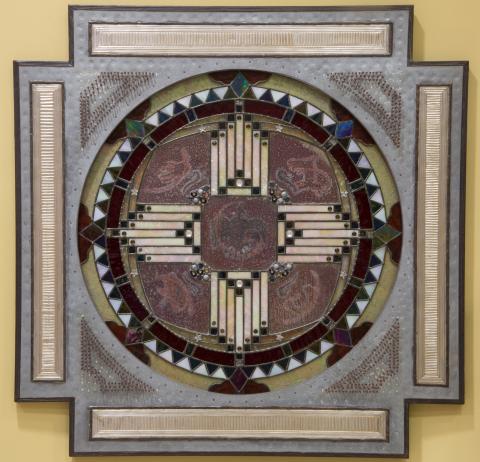 Gloria Baker Feinstein’s moving black and white images of children at play manifest deeper interpretive meanings.  A portrait and fine art photographer based in Portland, Oregon, and Kansas City, Missouri, Feinstein says photography is a perfect and powerful way for her to help make sense of the world, to put people, places, and events into some sort of order, and to commemorate and preserve the details of life around her.

The library’s permanent collection includes five of Feinstein’s prints, all of which are located on the south wall in the Youth Services Department on the 1st floor.

Sedalia, Missouri, artist Doug Freed typically paints with oils on two or more panels. One panel depicts landscape vistas of horizons, clouds, and bodies of water. The adjacent panel is often an atmospheric void where vestiges of the recognizable landscape are found.

Freed says he tries to capture the mystical light found in natural atmospheric effects: the haze in the distance on humid summer days, the overcast look of winter skies, the softness of landscape bathed in fog, and the quieting mood of approaching darkness.  His intent is to create paintings imbued with meditative spiritual presence.

Freed’s three-panel piece Remainder is on display on the north wall in the periodical reading area on the 2nd floor.  Remainder was donated by Missy and Dan Roebuck in honor of Mrs. Roebuck’s parents, Myra and Henry Armstrong.  The Armstrongs were the original owners of the land on which the Main Library is built.

Brett Longley, a Canadian native now living in the United States, originally painted wildlife but switched to dogs in the mid-1990s.  His work captures more than just the image of the dog.  Longley’s work is dedicated to exploring our relationships with dogs.  His paintings show humor and insight into the special bond between animal and man.

The library’s permanent collection includes several Longley works: Rear View, donated by the Fort Smith Kennel Club, on display next to the Information Desk on the 1st floor; Keeper of the Hog (signed print) located on the 2nd floor across from the Campbell Board Room; The Diet Starts Tomorrow and a basset hound study in the Youth Services Department on the 1st floor; and another basset hound study and a signed print (a part of The Diet Starts Tomorrow series) located in the Library Administration suite on the 2nd floor. 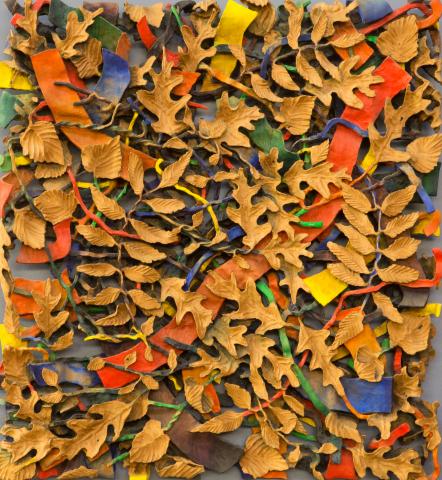 Wood sculptor Randall Rosenthal’s work often reflects nature: intricate collections of leaves, thick yet delicately woven forests, breaking surf lighted by the moon.  He starts with a single block of hardwood, adding nothing, but using blade routers, chain saws, and angel grinders in the creative process.  His finer work is created using as many as 50 hand tools.

The library’s permanent collection includes the New York-based Rosenthal’s piece Fun With Wood and Paint which is located on the 2nd floor near the public Internet computers.

Internationally recognized textile artist Cynthia Schiria works in the traditional technique of flat tapestry hanging, but combines traditional and modern influences.  Her work is included in permanent museum collections around the world including the Metropolitan Museum of Art, the Smithsonian Institution, the Chicago Art Institute, and the Philadelphia Museum of Art.  Her textiles are inspired by the landscape of the Kansas plains where she lived for many years, as well as by her training and experience in textiles centers around the world.

Schira’s piece Bird in the Bush is on display on the east wall in the periodical reading area on the 2nd floor. 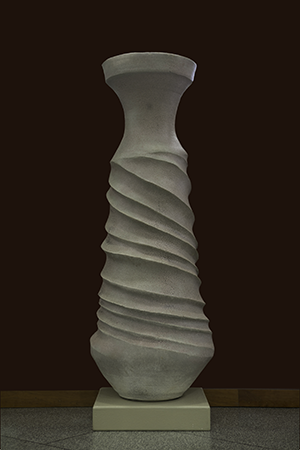 Ceramic artist Conrad Snider creates large-scale clay art for public and private spaces.  Working out of his Newton, Kansas, studio, he creates ceramic bottles, vessels, figures, and tile murals.  Each one-of-a-kind bottle is built over the course of eight to ten days, allowing a section to set before adding the next coil.  After drying from six to eight weeks, the bottles are fired for three days at temperatures ranging from 2,080 to 2,150 degrees Fahrenheit.  A six-foot tall bottle weighs about 300 pounds.
The library owns three pieces of Snider’s work: a figure titled Betty Blue and an untitled figure on the 1st floor and an untitled vessel near the elevator on the 2nd floor.

A number of other local and regional artists have work on display at the Main Library.  The library’s collection also includes works by:

The Fort Smith Public Library is not actively collecting additional pieces for the permanent art collection.  However, the library is pleased to host the work of local and regional artists and photographers for short-term display at all library locations.  Exhibitions change frequently, allowing for a variety of art on display at the library.

If you are a local or regional artist and would like to have your work considered for temporary display, please fill out the Art Exhibits and Displays information form.